Blister day today. If I carved plates every day, maybe I’d get callouses there, but it’s the same story every time. Most of the makers wear gloves when they carve plates, but I just put on band aids once the blisters get too sore. Band aids are the poor-man’s gloves.

Plate carving begins with the outside scoop: 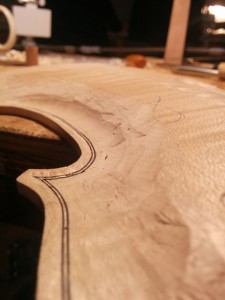 Then I make lots of wood shavings doing the long arch, down to the template:

Next comes the five template stations for the curtate cycloids. I designed and made my own templates for this build. I’ve managed to carve about four of them here, and then they’ll need to be blended. After this, lots and lots of scraping and refining. But you can see that the plate is beginning to look like a proper violin back: 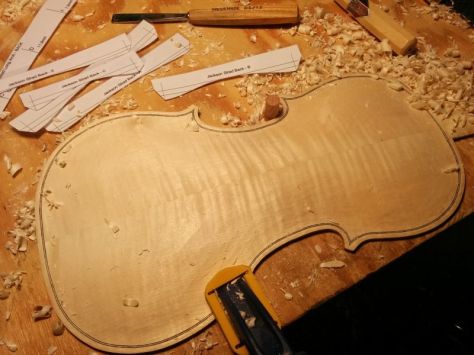 I also carved the bass bar today. My original system pretty much entailed looking up the measurement for the bass bar, then imitating the curves I saw in other bass bars. Michael had me subdivide the bar into nine stations, then he gave me measurements at each station that include plate thickness. My plate is kind of thick, which makes for a shorter bass bar. Here is all laid out:

And this is the result. I might still clean it up a bit, but you get the idea: 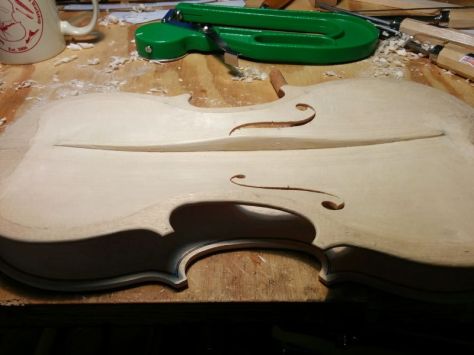 There were some other events worth mentioning. We had a group of homeschool kids come in on a field trip. My workstation was especially interesting, as I had all of the principal pieces of the violin represented: Ribs, neck and scroll, top and back. One of the homeschool moms asked if I drew the line around the edge of the plate I was carving and how I managed to carve over it without erasing it. So I got to explain that the lines aren’t drawn or painted but rather strips of wood that are bent and inlaid into the edge of the plate itself.

There is also another conference taking place here in Claremont, and many of the attendees of that event have wandered in, quite interested in what we are up to.

For our lecture today, Michael showed us a video on YouTube of Chinese workers churning out factory violins at lightning speed. It was a very ambivalent experience. On one hand, there were a lot of great things going on; ideas that we could benefit from. On the other hand, it was also discouraging to see. In the first place no violin maker will ever achieve the combined skills of a dozen assembly line workers who specialize in a single motion. One person installs purflings all day long, another bass bars, another graduations. Since they do no other job, their skill in that single aspect is insane. They work on dozens of instruments every week.

Michael pointed out that they had become machines, churning out tools. There was no joy in it, no preciousness nor thought nor care. Chip… glue… rub… done. Toss on the pile for the next guy.

I got thinking that I’ve made some pretty amateur violins, and they took me a long time. But an amateur instrument like mine can still be a surprising thing. Who knows what it might do, or what a musician could do with it. Those factory things, though… there are no surprises there. There is no chance that perhaps a great one is lurking among them. They are all the same, all official, all standard. How does a musician mold such a thing to his or her unique expressive needs? There are no stories and no muses that might come dancing off of those assembly lines, but in Claremont we are makers of talismans to inspire music.

Still, Michael encouraged us to push ourselves and, most especially, to finish what we begin, mistakes and all. You never know when a mistake might be a happy one.